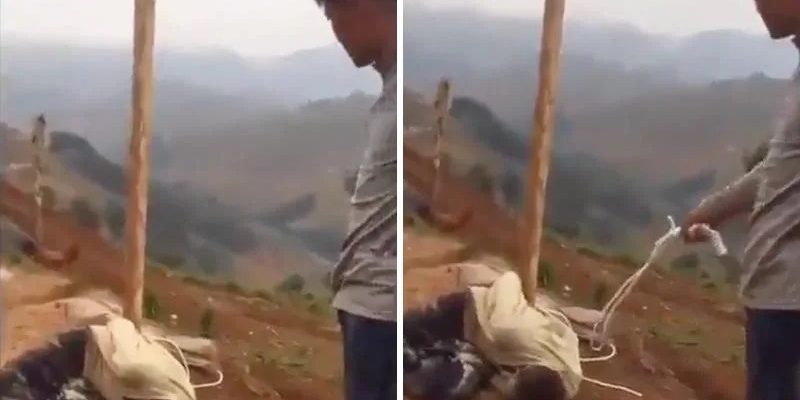 The Chinese have done it again, but this time to the wrong country. It will be recalled that a video surfaced from Sierra Leone in July 2021, when a Chinese expatriate worker was attacking Mohammed Kalma, the Safety Officer of Kingho Mining Company at the Tonkololi Iron Mines.
This year again, Bloomberg is reporting a story by the Associated Press, that a court in Rwanda has sentenced a Chinese businessman to 20 years in prison for torture after he was filmed beating a local man last year.
Sun Shujun had been accused of beating his workers in a case that drew attention because he was filmed whipping a man tethered to a pole on the ground.
A Rwandan man, Renzaho Alexis, was sentenced to 12 years for his alleged role as an accomplice in the beatings.
The Chinese embassy in Rwanda acknowledged Tuesday’s verdict in a statement Wednesday urging Chinese citizens living in Rwanda to abide by local laws.
“Meanwhile, the embassy calls for the case to be handled appropriately in a rational, fair and just manner and requests the legitimate rights of the Chinese citizens to be properly protected,” the statement said.
Shujun’s victims are reported to have been former workers at a mine he operated in the rural Rutsiro district. They had been reportedly accused of theft.
He was arrested after the video of him beating a man, including on the head, was widely shared in August. He was later released on bail.
Rwanda courts spokesman Harrison Mutabazi said the convict has a right to appeal to a higher court.
From this single action from Rwanda, one can understand why the UK Government plans to send asylum-seekers to that African country for processing, in a bid to deter migrants from crossing the English Channel in small boats. The courts in Rwanda work the laws of the country.
https://www.bloomberg.com/news/articles/2022-04-20/chinese-man-gets-20-years-in-rwanda-for-whipping-a-local-man