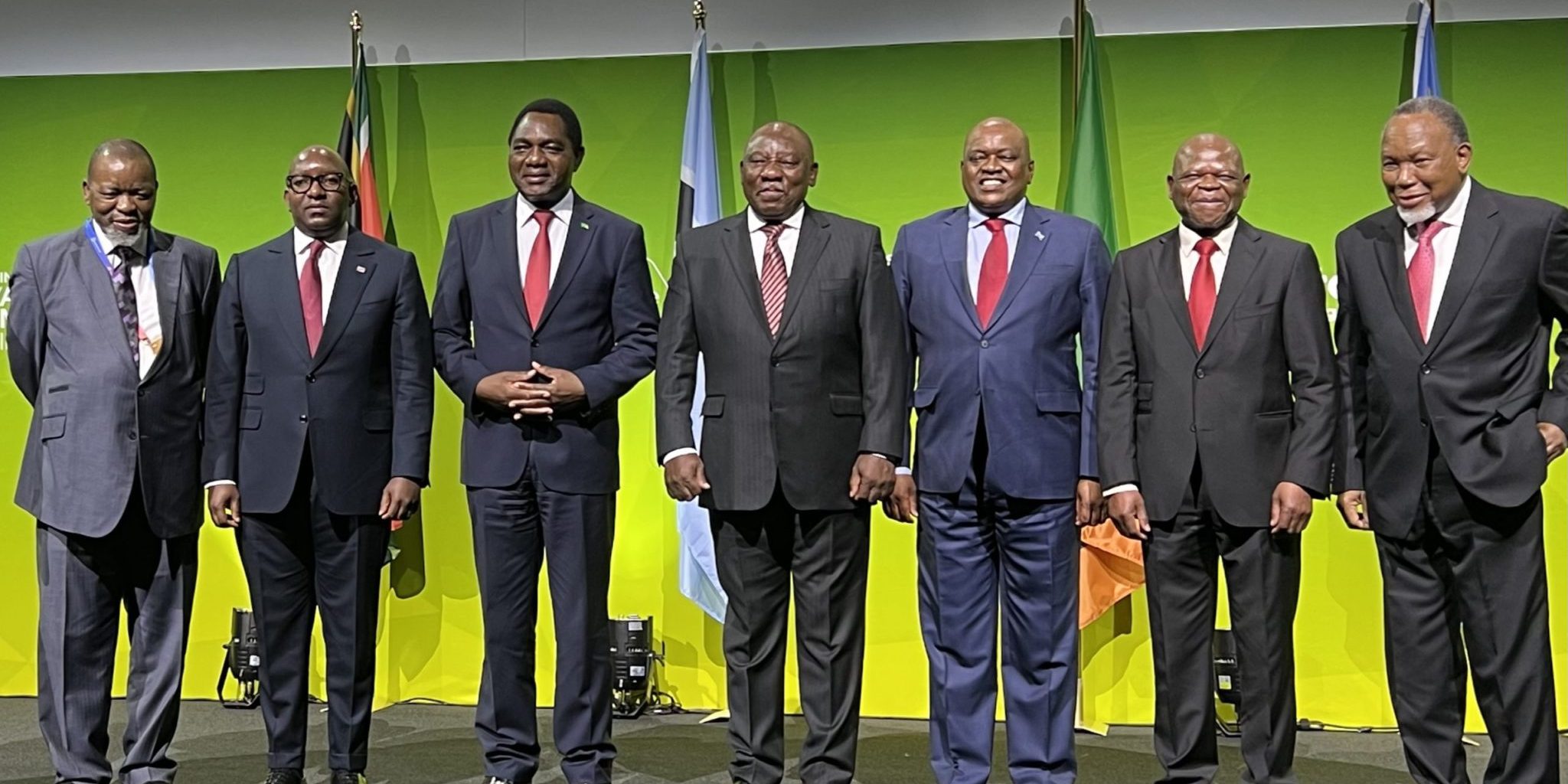 The Invest in Africa Mining Indaba heard that African leaders are waking up to the fact that the continent stands at the precipice of a generational opportunity to reinvent itself and participate in meaningful economic upliftment as the global energy transition accelerates. But to get there, several African leaders spoke of ongoing policy reforms to attract new investment and create new regional value chains to service the emerging green economy.
South Africa’s president, Cyril Ramaphosa, told the Indaba audience that policy reforms were at the core of what was required to lob mining back to being the critical driver of economic development that made Africa’s most industrialized economy in the first place. “Despite the great prospects for South African mining, we face significant challenges. It is a great concern that South Africa has fallen into the bottom 10 of the [Canada-based] Fraser Institute’s investment attractiveness index ratings. We’re currently standing at 75th of 84,” he lamented. The ranking underlines the fundamental reality that South Africa needs to move with a greater purpose to remove the various impediments, hurdles and constraints to the growth and development of the industry. “We understand very clearly the need to fix the regulatory and administrative problems that have crept into the system. We need to clear the backlog of mining and prospecting rights and mineral rights transfer applications and implement a modern and much more efficient cadastral system and implement an effective exploration strategy,” said Ramaphosa. “We understand very clearly the need to significantly improve the functioning of our railways, which have fallen into disrepair, our ports which are not performing at optimal levels, and the vital importance of ensuring a secure and reliable supply of affordable electricity. These tasks are at the forefront of our economic reconstruction,” said Ramaphosa. He noted the South African government had made significant headway in driving a policy reform program. An important area of progress is regulatory reform to facilitate new electricity generation by the mining and other sectors to meet the deficit that the country has been dealing with for the past decade. “Regulations have been amended to allow companies to invest in new generation capacity, up to about 100 megawatts, without needing a licence. We are working further to cut red tape for the registration of projects to accelerate the environmental approvals and strengthen the capacity of our energy generation company Eskom and municipalities to link such projects to the grid,” said the president. According to the Minerals Council, in South Africa, around 4,000 megawatts or ZAR65 billion of such electricity generation capacity investment was in the pipeline. “The unbundling of Eskom into separate entities for transmission for distribution and generation is on track and is set to be completed later this year,” he said. Further, South Africa is working with the Department of Water and Sanitation to implement a turnaround plan to issue water use licences that the mining industry relies upon. “We’re working towards a target of 80% of all applications being resolved within 90 days, and this will have moved from a process that took three years for a mining use licence or water use licence to be approved,” said Ramaphosa. On Transnet, the national rail operator, Ramaphosa noted the recent publication of the white paper on national rail policy, outlining plans to revitalize rail infrastructure and enable third-party access to the freight rail network. “We have heard the calls from industry for private operators to be allowed to operate the country’s dedicated coal, iron ore and manganese lines,” said Ramaphosa. The South African president is keen to draw on the experiences of neighbouring countries to work together with the industry and other stakeholders to strengthen the capacity of security services and law enforcement agencies to tackle illegal mining, widespread cable theft and general damage to infrastructure. “We’re setting up focus teams in the security establishment to deal with these challenges, and several successes are already being recorded,” he said.

Ramaphosa also committed to mobilizing the necessary resources and providing the required incentives for a new wave of exploration, particularly the minerals needed for the global energy transition. The recently released exploration strategy and implementation plan lays out South Africa’s ambition to focus on future strategic metals such as copper, which is in great abundance in Zambia and the Democratic Republic of Congo (DRC) and nickel cobalt and rare earths. “We aim to not only become an important hub for the production and export of green hydrogen, but also of green ammonia, green iron and steel and sustainable aviation jet fuel. South Africa’s hydrogen strategy aims to stimulate and guide innovation along the value chain of hydrogen and fuel cell technologies. This will sustain demand for platinum group metals and position South Africa to derive benefits from supplying high value-added products,” said Ramaphosa. This is a message other African leaders present at Indaba shared. The Republic of Zambia’s president, Hakainde Hichilema, told the conference audience mining was the anchor of his fledgling government’s ‘New Dawn’ approach to reinvigorating the country’s economy. “The DRC and Zambia hold more than 70% of the world’s copper resources. It cannot be ignored. We must use it to scale our people out of poverty,” said Hichilema. That entails building downstream linkages and hammering on the manufacturing of goods and consumables, and services supporting the energy transition. “We are committed to building a resilient, sustainable mining industry anchored on environmental social and governance standards and best practices because this is a bare minimum. If we can do it correctly, our determination to further industrialization will lead to sustainable job creation. The business opportunities are obvious,” Zambia’s president said. “Zambia, just like South Africa, is open for business. We are putting in place factors that will catalyze this transition.” Hichilema said his government had determined to respond to the high demand for copper, having set the ambitious goal to push copper output from 830 tonnes per year to more than 3 million tonnes per year. “Between South Africa, Zimbabwe, Zambia, and the DRC, plus others, we need to find common ground to fix our railways and move goods by rail. We need this region to work together to establish a regional supply chain able to service the new green economy,” said Hichilema. The DRC’s prime minister, Jean-Michel Sama Lukonde Kyenge, agreed. He underlined that the country boasted “incredible resource wealth,” yet only 19% of the country had been adequately explored. “All this mining potential is very important. But it needs to be complementary to developing the value chain for battery production for EVs,” said Sama Lukonde Kyenge. “But to do so, we need collaboration between all producing countries. We have cobalt and lithium, but we need to collaborate with other African countries like South Africa for nickel. Together we can create an African value chain geared towards the energy transition,” he said. To this end, the governments of Zambia and the DRC last month signed a memorandum of understanding to facilitate the development of value chains in the electric battery and clean energy sector. “We’ve agreed on an MoU with Zambia to cooperate on electric batteries. We want to extend the partnership to other countries too. It entails increased green energy production and distribution to ensure energy security and power our emerging manufacturing sector,” he said. “There is a clear commitment by the heads of states here to support each other in the mining sector and ensure that we go towards a fairer world where we work together to fight climate change,” said Sama Lukonde Kyenge. Botswana’s president, Mokgweetsi Masisi, said mining remained the most critical sector of the country’s economy. He implored investors to “seriously consider coming to Botswana to carry out exploration and mining projects,” as his government was completing a project that would bring geological mapping coverage for exploration to 90% nationwide. The slow uptake of mineral beneficiation industries to diversify the economy had, according to Masisi, for years been “a thorn in the flesh.” “Beneficiation will mean we are fully taking ownership of the value chain of our minerals across the spheres of upstream, midstream, and downstream mining economic activities instead of exporting these to other countries,” he said.
Category: News & EventsMay 22, 2022Leave a comment
Share this post
Share on FacebookShare on Facebook TweetShare on Twitter Pin itShare on Pinterest Share on LinkedInShare on LinkedIn